A downloadable game for Windows, macOS, and Linux

⚠ CONTENT WARNING: This game is 18+ and strictly for adult viewing only, contains themes and depictions of violence, murder, blood, drug use, toxic and abusive relationships and explicit sexual content.

NIGHT/SHADE is a visual novel about overcoming the toxicity within interpersonal relationships as well as within oneself. This character driven plot explores the complexities of love and loss in the form of a romantic thriller through the eyes of our main character, Sasha, while he navigates life's darker elements and tries not to get caught in the crossfire of two ruthless crime syndicates. Estimated game release once we have been funded is late 2021.

This is a Unity game! Download and unzip the file, then run NIGHT-SHADE_Demo.exe. Please allow at least 1.5 GB of disk space for unzipping.

If your computer has issues viewing the trailer or is known to have a slow hard drive, please try using the compatibility version, otherwise let us know any issues in the comments!

Well, I just finished the demo and I found it interesting. I liked the art  in general, specially the animation at te beginnig. Good job so far <3

I finally did the demo and... gosh I just can't wait for the full version! \o/

To be honest, I discovered your works because of a Tweet to your Kickstarter campaign from the Valentyne Stories Necromancy's Twitter and both of yours do a very inspiring work.

The writing looks very different from what I played until now. While the most of them I played are dedicated to the narration,  is more visual and it's very immersive.

The intro animation is so stunning... and all this tension... argh why is it sooooo short? I really would like to see more!

Anyways, congrats for your Kickstarter campaign again! I can't sadly support you financially but make you sure that I'll share your works into social networks (mostly in Twitter where I'm the most active). <3

Thank you so much!

Can't wait for the full version, the intro animation hooked me up real quick and the awesome art and tension kept me in my toes until the end of the demo, from what i played i must say, excellent job.

Thank you so much for the kind words and playthrough!

I would like so much to test the demo but I have issues when I try to run it, even with the compatibility version... :'(

I have a Windows 64 bits

If you'd like you can email us at info@nightshadevn.com and we can troubleshoot with you to figure out what's going on! Hopefully we can get it running for you so you can play!

Thank you so much! \o/
I sent you an detailed mail about my issue.

When do you think the whole game will be released? :3

If our Kickstarter is successful and we get funded, we are aiming for a 4th quarter 2021 release!

This was really good! The art is gorgeous, the animation is really good, and it has incredibly good atmosphere! I can't wait for the full game after playing the demo. I unfortunately can't support it financially, but I'll make sure to tell people about it!

Thank you so so much for your support! We greatly appreciate it and are so glad you enjoyed the demo!

i was really looking forward to it, the art is so beautiful and the story flowing so well! gonna wait for the full version :)

Thank you so much!!

i cant run it

What platform are you running on? :o Mac is known to have issues at the moment, we'll hopefully address these with a browser playable demo.

II really liked demo. Especially art. I am waiting for the full version. Good luck to the author. Too bad I can not support you.

Thank you! And no worries, if you can't support us financially feel free to spread the word!

Didn't expect that is was looking this good. The art and animation is just wow. Really love to see more of it.

Thank you for the playthrough and the kind words!! We're sure to keep you posted over on twitter!

This game cannot come out soon enough! The way the story flows and builds tension is really great! 10/10, would pay to play this!

Thank you so much! If you back us on Kickstarter we can get this done (and you get it at the reduced kickstarter price >:o)!!
https://www.kickstarter.com/projects/kingasphy/night-shade-youre-the-drug

I was randomly scrolling through games when I came across this demo. I am unable to play the this due to the fact that I have a Mac but I can at least say from first glance this looks very promising!

Are you ever planning to make a Mac version for this?

Hi! We're working on a solution right now, we had a Mac build up but ran into some problems with it, failing that we're gonna try to make this browser playable soon!

Oh cool! I'll keep an eye out then! In the mean time I'll snoop around your kickstarter and try to spread the word. I'm confident that you'll reach your goal in no time! Good luck with everything !!

Thank you! We have a hopefully functional Mac build up now, let us know any issues!

I went through the demo and everything looked very promising!! I couldn't stop gushing over the background art and music!! I personally just adore just how clean and vibrant the art is. It really adds to the experience. And the music is just *Chef's kiss*. I have fallen victim to weird or grating music in other games but for this it took it to a higher level! Something I would like to touch up on is voice acting. Personally, I tend to resent voice acting since it usually takes away from the experience but I can honestly say that doesn't happen here. Giving the player the option to lower the voice volume was a good choice! Also, the idea of letting the player using the phone was refreshing! If you ever need some feedback from Mac players don't be afraid to ask!

On another note, since I am well aware that the Mac version has had some issues I poked around the demo and found something a bit confusing. I took a gander at the options for the game and was quite glad that there was an option to fiddle around with the sound when I came across a problem. Clicking on options causes the game to freeze and the player is unable to exit out of settings. At this point I could only exit out of the entire demo and restart it in order to fix this. This isn't such a big deal at this point but I thought it was important to inform y'all about it! I know Mac is very hard to work with due to it limitless security settings and wonky downloading steps but it's worth it for this game! Sorry for writing a lot and if it makes no sense I apologize again. If you need me to elaborate on anything I'll be glad to do so!

Thank you for your kind words and feedback! We'll hopefully have more resources to look into it down the line!

HOLY SHIT, okay first off I just wnt to say that this is so STUNNING. the art was on point, I keep watching the pv animation that was in the game... and the writing kept me really engaged especially near the end. The sounds made my heart beat with sashas and I really love a game that gets my heart racing.... in a bad or good way. The voices came out so good and I wanna hear... more....

ALSO I JUST WANT TO SAY THE LOG FOR CHATS BEING A PHONE IN THE HAND IS SO CREATIVE??? AND WHEN I STARTED THE GAME I SWEAR I WAS LOSING MY SHIT... I AM SO PROUD OF THE CREATORS and they're doing such an amazing job I can't wait to play the full game!!!! I am definitely going to back this game as much as I'm able because I think products like this should be finished fully with no set backs!!! keep up the good work and I am SO excited to see how the full game ends up looking ;;;; I wanna get all the endings and just see... alll that spicy art and character design... god sorry for rambling IM JUST SUPER EXCITED FOR THIS VN!!!

Haha no worries, thank you so much for the support!!

All I can say is that I've been blown away by the demo! Although short, it made me itch for more which I find is exactly what a small teaser demo is for! I screamed at the end because of how much I wanted to find put who it was (my guess is Mishka cause that boy seems like he would just have a spare key he made on the side anyways)

I've always been such a huge fan of talltell visual novel games where your choices do matter (I saw that you can actually die in a route say HWHAAATTT!!)

The music and visuals are top notch and through my whole playthrough I could see all the hard work you two artists put, as well as the love and dedication to make it all come to life despite having such a small team.

I'm absolutely excited to see what this game once completed will have in store for us all. The option to toggle between SFW and NSFW is a great add and deffinetly something more 18+ games should have!

I scream softly as my wallet waits to be charged once this game gets fully funded, because I have the outmost confidence that Night Shade will undoubtly make that stretch to success in no time!!

Thank you so much!!

I felt that the demo was very narration-heavy. I'd like more show and less tell (less "novel" and more "visual"), but I understand if art assets and programming are in short supply at this stage. Other than the music, this would have worked as well or better as a prose novel for me; as-is, it's insufficiently adapted to the medium in my opinion. That's definitely something that can be smoothed out during revisions, though, and as I said, being at the demo stage has its limitations.

I also thought that the prose and emotions were too overwrought in some places for my tastes, but that's possibly just personal preference / aesthetic.

I'm told that y'all are friends of a friend of a friend, and it looks like the sort of thing some of my friends might like, so I'm going ahead and backing at the Game Suite level. (I'm curious about the drama skits and artbook, and it's a very reasonable price increase over the prior level, especially at Early Bird prices!)

Thank you for your support and feedback!

Will there ever be a full game version in the near future?

If we get funded on our Kickstarter, then yes!!! If all goes to plan were aiming to complete the game by late 2021!

That's amazing! I can't wait to see that happen! I already enjoy the characters and everything you've guys have put together already ❤️

Thanks so much! We'll keep you posted on our twitter @NightShade_VN !! 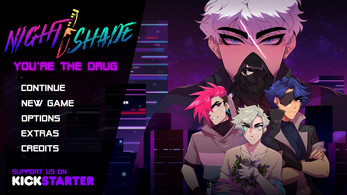 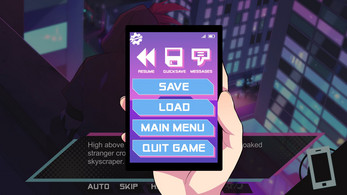